We we’re approached by boutique Wealth Management firm Gordon Wealth Management to help bring their services to a market that has been drastically unrepresented in the financial planning sector as a whole. With this, 7C established a strategy to tap into the young executive market in the GTA via strengthening their already existing image established from a focus on print and word-of-mouth, as well as create an online identity and ad strategy from the ground-up.

The results included four separate market research reports to hone target audiences over test-periods of 1 and 2 months respectively, print adverts and marketing material distributed strategically from aforementioned research results, a social media marketing strategy and the management of their accounts, a highly dynamic and full-featured website with both photography and videography conducted in-house and an online ad strategy with creative included.

Notable components include a custom user-controlled web application that broke down the monotony of the common listed item format, web elements that use the gyroscopic properties of a user’s phone to add dynamism to graphical assets, and market research results that have adjusted the firm’s overall sales focus.

Wealth management is an industry often characterized by its seemingly dry appeal to the average consumer, often holding a negative connotation as being boring in the same vain as a doctor’s visit. This is in no small part related to the frequently lacking websites and online presences that even industry leaders possess. Internal research concluded that a large portion of the industry saw their web presence as a low priority and would not consider updating their website in any term less than 5 years and would consider a reasonable period to update their website to be 10 years after the previous iteration. These metrics are substantially lower than that of most industries, and provided context to the overwhelming amount of retirement planning and retired client basis Harbourfront had amassed although they greatly desired to pursue the growing young executive market fostered by the increased tech-presence in Toronto.

After conducting four separate market research reports, 7C approached Harbourfront with a strategy that would bring their website to the foreground and turn it into their most valuable marketing tool. This approach was based on the principle that appealing entirely to a younger market risked alienating their current client demographics, and instead a sounder approach would be to create an interactive web experience simple and elegant enough to coincide with traditional web interactions with a visual identity that remained professional yet approachable that could effectively direct a user to the relevant information for their demographic.

A critical part in achieving the requirements set above was to bring the Harbourfront brand to the mobile sphere; something not yet explored in their operation and a rarity in the industry as whole. Effectively, two separate versions of the website we’re designed with responsiveness functions managing all screen sizes in between full screen and mobile screen. The mobile website was designed with the younger executive market in-mind, as both internal and external research had shown that market trends towards mobile interaction over desktop was primarily driven by younger age groups. In order to make the mobile version of the website its own fixed asset, several smaller functions of the design we’re altered that would add a level of dynamism normally not seen on mobile websites; the most notable of which was creating functionality on several assets on the site that would react and move based on the gyroscopic response of a user’s phone, thus allowing them to interact with the website in 3D, appose to interacting with the site in the same way one interacts with a newspaper. Great care was also taken into creating animations that would be functional on mobile, which also rare in most designs.

Harbourfront Wealth Management operates on a distinct service delivery system that they refer to as “The 6 Step Process”. This tool was determined to be very effective as a lead generator and added much needed context to the actual service of wealth management. 7C sought to bring the 6 Step Process to the forefront of Harbourfront’s website, as the previous iteration of it was displayed in a simple spreadsheet, often buried by other irrelevant content. An interactive web application was constructed and imbedded into the website. This application operated much like a slideshow, however also allowed for increased depth by providing branching paths based on a user’s inputs and selections. This system was critical in taking one of Harbourfront’s most effective selling tools to a wider, more accessible market online.

Part of the strategy established by 7C involved further marketing and advertising incentives that would coincide with the new brand image and target markets established from the extensive updates to the Harbourfront website.

In addition to standard digital advertising such as display ads, adword pushes and social media advertising, special care was taken towards introducing Harbourfront to automated client acquisition techniques. This included automated targeted email systems, online client confirmations and digital delivery systems. The introduction of email marketing to Harbourfront found great success as it provided a method to utilize digital advertising in way that would not alienate nor seem unusual to some of Harbourfront’s elderly clientele, while still remaining professional and engaging across the rest of their client basis. Automation of this process also saved countless working hours from the staff as follow-up emails and happy birthdays etc. we’re now streamlined into a totally hands-off system.

Furthermore, this refocus was also brought into their physical marketing initiatives via updated stationary, flyers, business cards, and a slew of other marketing material that reflected a more polished and refined brand image.

Harbourfront Wealth Management underwent a critical revamp of their capabilities, effectively allowing their boutique team to reduce the amount of time focused on prospecting by generating sound leads automatically from web traffic. Harbourfront saw a 400% increase in web traffic with a 38% increase in new traffic via mobile browsers. 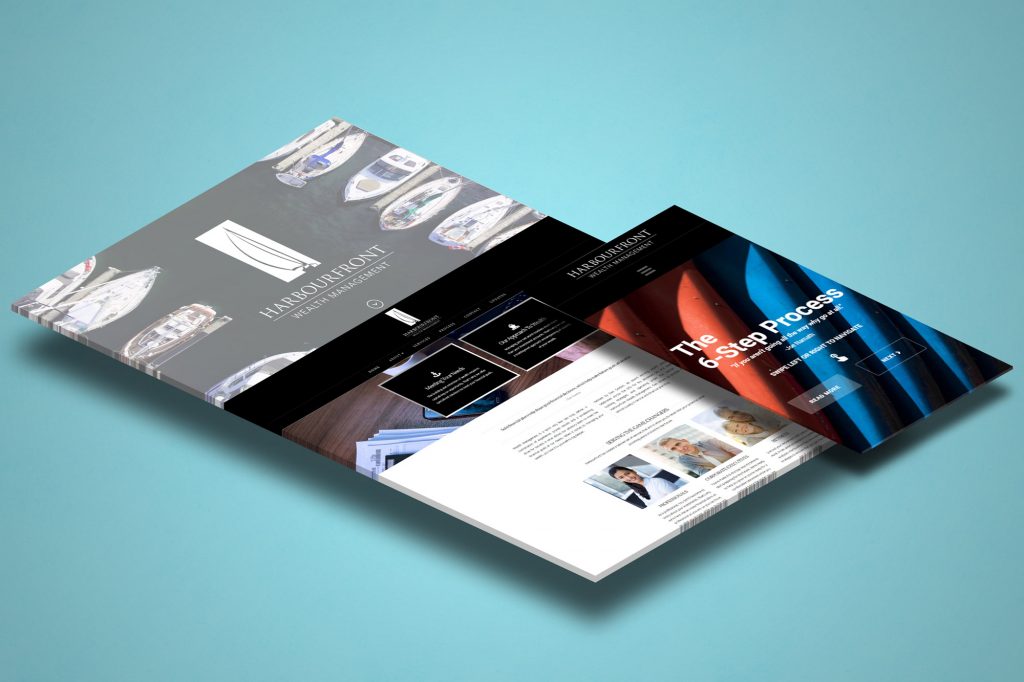 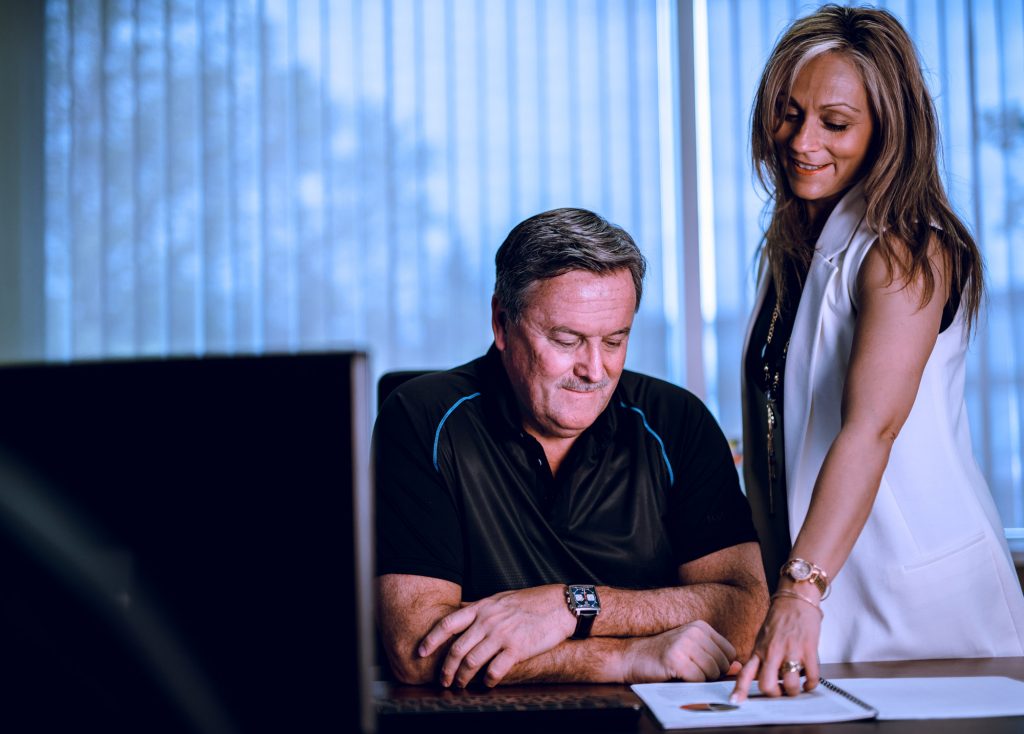 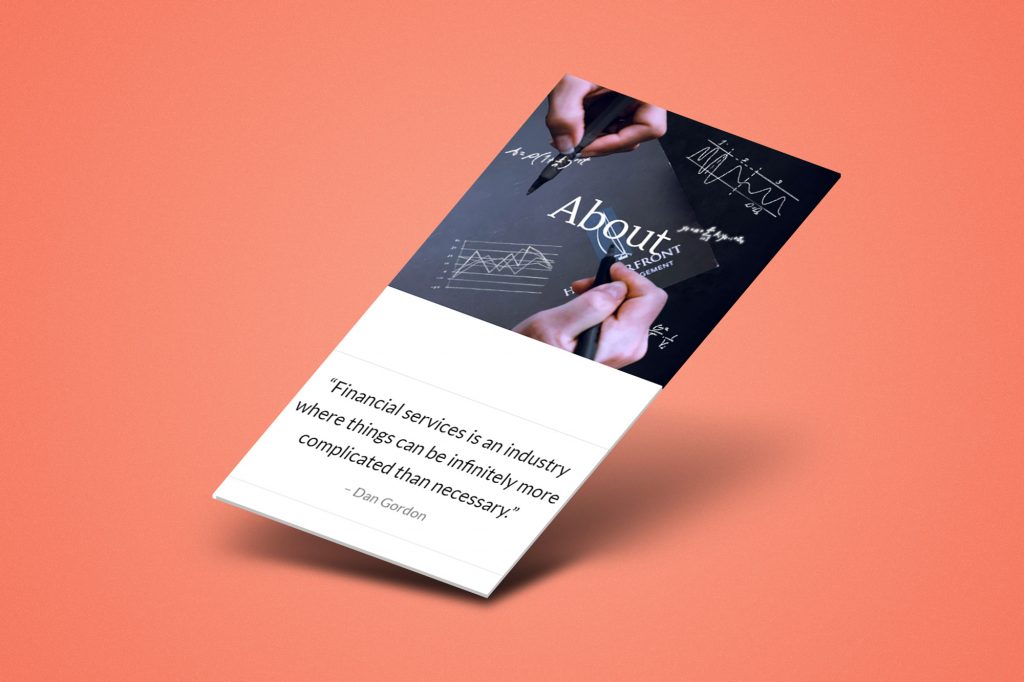 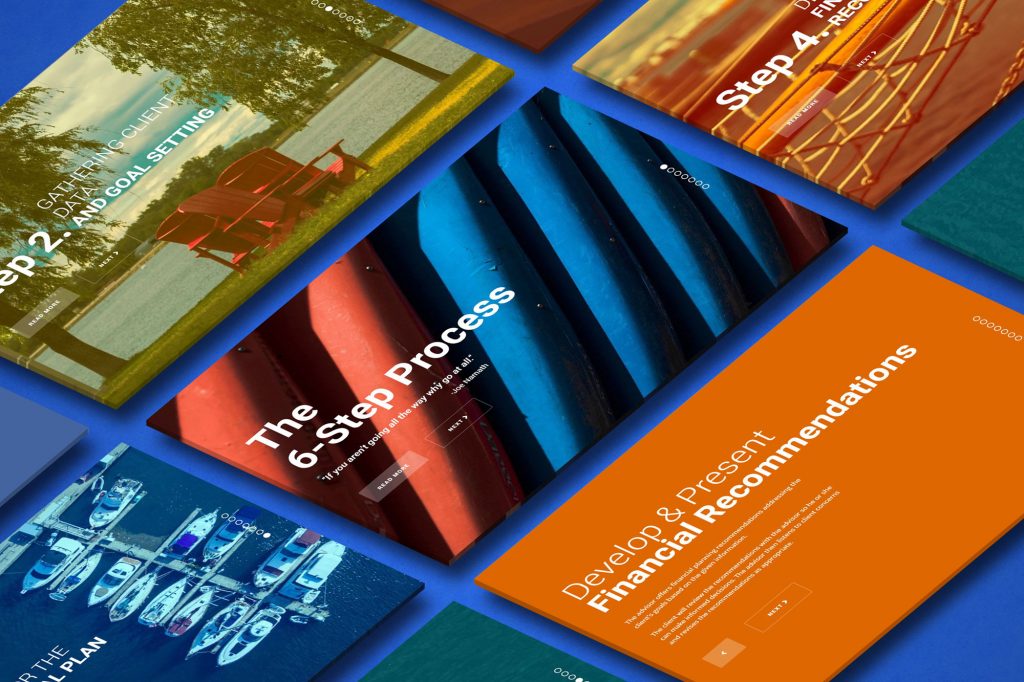